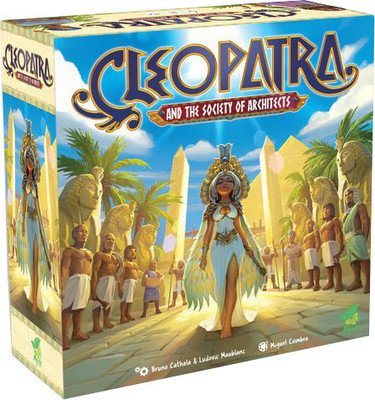 Cleopatra and the Society of Architects

Designed by Bruno Cathala and Ludovic Maublanc, Cleopatra and the Society of Architects is a fun and engaging game that includes a three-dimensional palace that players compete to build. Players strive to become the wealthiest of Cleopatra's architects by constructing the most magnificent and valuable parts of her palace.

Players, however, will be tempted to trade in materials of dubious origins in order to build faster. While these corrupt practices might allow an architect to stay a step ahead of the rest, they come with a high price: the cursed corruption amulets honoring Sobek, the crocodile-god. When Cleopatra finally reaches her new palace at the end of the game, she punishes the most corrupted architects (i.e., the ones with the most amulets), depriving them of riches or giving them as a sacrifice to her crocodile! The wealthiest architect from among those still alive wins.

This new edition of Cleopatra and the Society of Architects has a new graphic design by Miguel Coimbra, a free-standing 3D palace, and rulebook updated by the designers for simplicity and fluidity, which incorporates these gameplay changes: