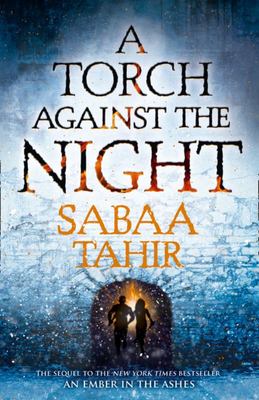 A Torch Against the Night (An Ember in the Ashes #2)

This highly anticipated sequel to "An Ember in the Ashes" takes readers into the heart of the Empire as Laia and Elias fight their way north to liberate Laia's brother from the horrors of Kauf Prison.

'This page-turning series is building to something more than the sum of its cliched parts. Tahir does political intrigue very well' Guardian PRAISE FOR AN EMBER IN THE ASHES: 'Game of Thrones fans will relish Tahir's debut set in a brutal Rome-inspired empire. It follows Laia, a slave and Elias, a young soldier, whose lives are unexpectedly intertwined in this story of freedom, loyalty and love' Independent 'The writing is as smooth as silk and keeps one reading long after the lights should have been out' Robin Hobb 'With AN EMBER IN THE ASHES, Sabaa Tahir shows us light in darkness, hope in a world of despair, and the human spirit reaching for greatness in difficult times.' Brandon Sanderson, #1 New York Times bestselling author 'I fell in love with Laia and Elias from the moment we met. This is a story you'll read with your heart in your throat' Lauren DeStefano, New York Times bestselling author 'A heart-pounding story of love and loss, with the most original world-building I've read all year. Deeply felt and deeply moving, I could not put it down' Margaret Stohl, New York Times bestselling author of BEAUTIFUL CREATURES 'This electric debut is a pulse-pounding, action-packed Romeo and Juliet story in a richly imagined world with a great twist and heroic characters you'll root for and won't stop thinking about' Melissa de la Cruz, New York Times bestselling author of FROZEN and THE RING AND THE CROWN 'AN EMBER IN THE ASHES is a spectacular page turner that asks readers to consider how far they'd go to save the ones they love. Sabaa Tahir is the next superstar in young adult fiction and her debut is as cinematic as Gladiator and as high-stakes as Game of Thrones' Holly Goldberg Sloan, New York Times bestselling author of COUNTING BY 7S and I'LL BE THERE 'Blew me away...This book is dark, complex, vivid, and romantic-expect to be completely transported' MTV.com

Sabaa Tahir grew up in California's Mojave Desert at her family's eighteen-room motel. There, she spent her time devouring fantasy novels, raiding her brother's comic book stash, and playing guitar badly. She began writing An Ember in the Ashes while working nights as a newspaper editor. She likes thunderous indie rock, garish socks, and all things nerd. Sabaa currently lives in the San Francisco Bay area with her family.