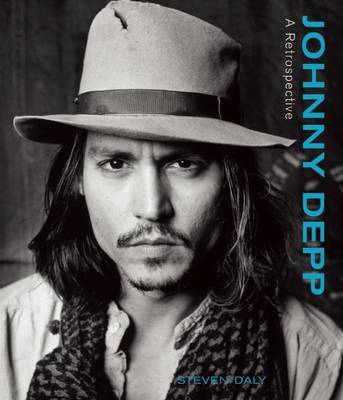 Johnny Depp has captivated moviegoers for almost three decades. One of the most gifted actors of his generation, his charismatic screen presence has brought to life such characters as the tragi-comic "Edward Scissorhands," the compassionate but tormented Gilbert Grape, the edgy FBI agent Joseph D. Pistone (under cover as Donnie Brasco), the murderous Sweeney Todd, and, of course, the swashbuckling Captain Jack Sparrow--to name a few. Impeccably designed and lavishly illustrated with more than 200 stills and behind-the-scenes images from the movies themselves, "Johnny Depp: A Retrospective" is the definitive celebration of this uncompromising actor's intriguing and deeply personal moviemaking story.
This timely retrospective, published to celebrate Johnny Depp's 50th birthday, charts his career from his first role in Wes Craven's classic horror "A Nightmare on Elm Street" (1984) through his legendary incarnation as Captain Jack Sparrow in all four "Pirates of the Caribbean" movies, and the many roles he has brought to life with director Tim Burton (Edward Scissorhands and the Mad Hatter among them), to his most recent role as Tonto in "The Lone Ranger" (2013). Movie by movie, journalist and author Steven Daly draws upon first-hand interviews, as well as his own in-depth knowledge of Depp's movies, to appraise the actor's remarkably varied career.

Steven Daly is a writer, journalist, and broadcaster. He writes for numerous magazines, including "GQ, Details," and "Rolling Stone," and he has been a contributing editor at "Vanity Fair" since 1999. He is co-author of "The Rock Snob's Dictionary," which was originally a regular "Vanity Fair" feature, and he also co-wrote the influential youth-culture reference book "alt.culture." In a previous incarnation, he was the drummer for Orange Juice, the MOJO award-winning Glasgow band often credited with "inventing" indie-rock.
He lives in New York.