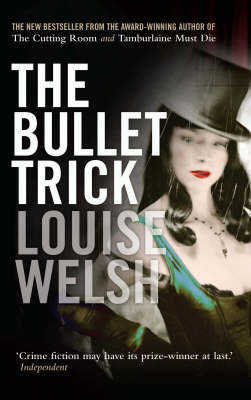 When down-at-heel Glasgow conjurer, William Wilson gets booked for a string of cabaret gigs in Berlin, he's hoping his luck's on the turn. There were certain spectators from his last show who he'd rather forget. Like the one who's now a corpse. Amongst the showgirls and tricksters of Berlin's scandalous underground Wilson can abandon his heart, his head and, more importantly, his past. But secrets have a habit of catching up with him and, as he gets sucked into certain lucrative after-hours work, the line between what's an act and what's real starts to blur.

"Louise Welsh goes Sadowitz on us: you'll laugh with gusto, you'll gasp with shock, and in the end you'll be left asking yourself: How the hell did she do that?" Christopher Brookmyre "With breath-taking pace Welsh weaves an astonishing spell of dark glamour and brutal realism. The Bullet Trick is a masterpiece of despair." Jake Arnott "I'm so jealous I could spit." Denise Mina

Louise Welsh is the bestselling author of The Cutting Room and Tamburlaine Must Die. She was chosen as one of Britain's Best First Novelists of 2002 by the Guardian, won The Crime Writers' Association Creasey Dagger for the best first crime novel, and the Saltire First Book of The Year Award, 2002.